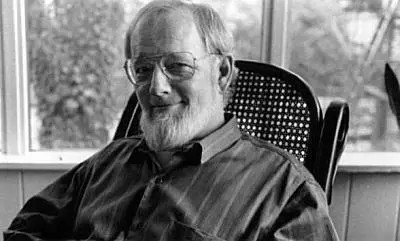 At college, I host a weekly radio show. My co-host, Michael, and I read and discuss our favorite short stories and poems. Michael is an older man who has amassed a lifetime of literary knowledge. One day, shortly before our show, I told him I would be reading some stories by Donald Barthelme. He said that his impression of Barthelme (whom he had, admittedly, little read) was that he was an abstruse, academic writer whose stories don’t come to deeply human conclusions.

He was not wholly wrong. Barthelme does have some forbidding stories, stories that take heady aim at existentialist philosophy, such as “Kierkegaard Unfair to Schlegel,” “A Shower of Gold,” or “Nothing: A Preliminary Account.” Barthelme’s puckish, sometimes irreverent style probably does no favors for readers feeling alienated.

But not all of Barthelme’s stories are like this. Some, such as “Rebecca,” are modest in scope but great in depth. After the story ends, the narrator of “Rebecca” directly tells the reader the moral of the story. This is a surprising move, not only because it successfully avoids cheapening the story, but also because it contradicts Michael’s impression, which is a common one. “[O]ne should never cease considering human love, which remains as grisly and golden as ever, no matter what is tattooed upon the warm, tympanic page” — certainly a deeply human conclusion. The narrator says that there were other reasons for the story’s being written, but coyly insists that nine of them are secrets; whether or not readers take the bait, the tenth reason will satisfy them.